Baseball Canada is pleased to introduce Shaped by Our Game, a new initiative on baseball.ca that will profile people who have used our sport to achieve success later in life. Baseball is a sport that provides great life lessons and teaches skills that are applicable for future success in life whether on the baseball field or not.

In our first Shaped by Our Game installment, we profile Dominic Therrien of Trois-Riviéres, Québec, a former National Team and Professional player who is now a successful Lawyer in Vancouver, BC. 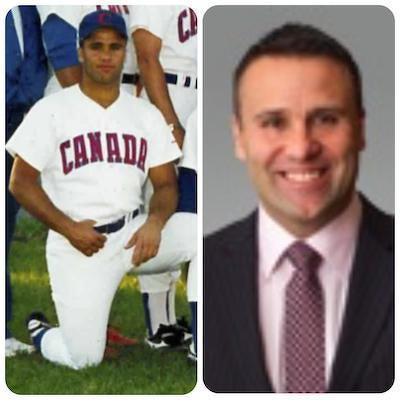 Dominic Therrien grew up like most young Canadian boys playing hockey in the winter time and trading in his skates and stick for a baseball glove and bat during the summer.

For Therrien, baseball started to become serious when Baseball Québec instituted a Midget AAA program bringing the best 15, 16 and 17 year-old players from the province together in one league. Therrien was then introduced into the Baseball Québec provincial program that opened the doors to the Youth (18U) National Team where he competed in two World Championships including 1989 in his hometown of Trois-Riviéres and in Cuba in 1990.

It was in 1990 that the third baseman began receiving interest from major league clubs. Back then; players out of Canada were not eligible for the MLB Draft so Therrien was able to negotiate with multiple clubs for his services. On December 5th, 1990, the day before MLB changed the rule to include Canada as a draft country, Therrien signed a contract with the Atlanta Braves. During contract negotiations it was Therrien’s mother who insisted that the Braves pay for some post-secondary education should baseball not workout. Little did he know at the time, but that tactic would pay dividends in Dominic Therrien’s post-playing career.

After four seasons in the Braves minor league system, and with players like Chipper Jones and Ryan Klesko on the verge of big-league stardom, Therrien decided it was time to look at a career outside of baseball and thus retired as a professional baseball player.

It wasn’t immediately clear as to what career path Therrien would take when his playing days were done. After spending his off-seasons taking classes at the University of Montréal, Therrien completed a Bachelor of Political Science in 1997 and decided to continue his studies in France where he completed a Masters in International Politics at Université de la Sorbonne in Paris. It was in France, through an old friend, that he rediscovered his passion for baseball playing two seasons for the Huskies of Rouen in the French Professional League in what would be his final time playing the game. His time in France also provided clarity on a career decision leading Therrien to return to Montréal where he attended Law School at the University of Montréal and graduated in 2001.

Today, living in Vancouver with wife Marie-Pier, daughters Florence (8) and Raphaëlle (6), and newborn son Samuel, Therrien is a partner with Miller Thomson Lawyers/Advocates where his practice centres on Canada’s “high-end” business immigration programs.

Amateur Coach who had an influence on you growing up and why?

On Émond:
“I was lucky because I had a lot of great coaches during my career, but Richard stands out because he coached me for so many years. I still keep in contact with him a little bit today.”

On Upham:
“As a local player playing for Canada at the 1989 World Youth Championship in Trois-Riviéres, John wanted to protect me from the media and the pressures of playing in my hometown because he wanted me to focus on baseball.”

“It takes leadership and courage for a coach to say ‘I’m going to take heat from the local media, but I’m going to do what’s right for my player.”

What skills did you learn through baseball that you still use today?

“Baseball is a fairly slow game and you have to be focused most of the time. You show up early, take batting practice and spend time preparing for the game. Being a lawyer, you’re forced to spend long hours reading and retaining information which can be boring so that focus and self discipline is something that I carried from baseball into my (law) career.”

“As athletes we take (self discipline) for granted because (these days) everyone is training, everyone is going to the gym. So I think for people that don’t have that background, it’s hard to just turn it on a decide that I’m going to study for four hours a day if you don’t have that skill-set behind you.”

“For people who have never been in that situation it can be tough. I felt pressure to perform very early on in my playing career. It’s the same in the real world where clients and colleagues are expecting a certain level of performance from you.”

“In my case, performing under pressure is something that baseball helped me to develop.”

“When you work in a group you may not agree or get along with everyone, but you need to find common ground in order to accomplish a common goal.”

‘It’s the same dynamic in baseball, you have 25 teammates all trying to accomplish the same things which is similar to working in a big law firm as I currently do.”

“These are all skills that you learn, you’re not born (with these skills) and baseball helped me with a lot of them.”

What advice do you have for young baseball players today?

“Not every player that plays the game is going to play professionally, kids are aware these days and know this, so I think it is very important to have a good plan B.”

“Another key is using some of the great skills that baseball teaches you and adapting them for use in real-life experiences. It is one thing to have these skills, but the real challenge lies in putting them to good use.”

Do you still have relationships with anyone you played with as an amateur?

“Absolutely! With social media the way it is these days it’s easier to keep in touch.”

“I still keep in touch with (former teammates) Alex Messier, Patrick Dupuis and even Richard Émond a little bit. We didn’t quite realize it at the time, because you’re so young and innocent, but you look back and realize how great of a time that baseball provided us with.”

“Baseball is all we talk about whether it be the bus rides, the games or what not. Baseball is the glue that keeps us together.”